The Fitz-Henrys of Rock, Worcestershire 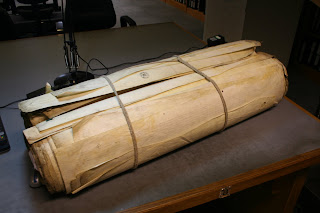 I've been back at the National Archives in Kew revisiting some documents that I started on a few weeks ago. The Court of Chancery was where (amongst other things) Wills were disputed. Richard Watkins was the Rector of Rock in the late 1700s and died a very wealthy man in 1805. He had 3 children. Charles his son was his legal heir but he also made provision in his Will for his two daughters Ann and Elizabeth. Ann married Andrew Fitz-Henry in 1799 and inherited her marriage settlement of three thousand pounds. Elizabeth married Thomas Bradley Paget after her father had died on 7 September 1809, 2 days after her 21st birthday when she would have expected to inherit. She didn't get her money or any part of her father's estate.
This Case went on from 1810 when it was first presented to 1835. I've got as far as the early 1820's now. It's all getting pretty fraught.
The great thing for my research is the minute detail in which the family members and their relationship to each other is described, and as the case goes on births and deaths of the interested parties are recorded. This is before the 1837 watershed for the registration of birth marriages and deaths so these documents are a godsend. The downside is the huge often filthy rolls of parchment you have to go through to get the prize - never wear light coloured clothes at the Archives!
The following is a combination of the information from the Chancery Papers and from other sources
Andrew Fitz-Henry married Elizabeth Watkins 22 July 1799
Children: Ann Elizabeth 1800, Catherine 1801, Honoria (also known as Mary)1802, Matilda 1805, Andrew Richard 1807 (died in London 1844), Maria Rosetta 1808, Charles 1810, Thomas 1811, Sarah 1812 and John 1814.
Recognise any of these? Leave me a comment!
written by Unknown

... part of the Fitz(-)henry One Name Study project

... a collection of stories and information that we've found about people named ... Fitz(-)henry whether or not they've got a hyphen ... Fitzharris .... Fitzsenry ... and any other variant you can think of!

Got a story for us?
Recognise any Fitz-Henry or Fitzhenry people in the blog?
Drop us an email.